Many are criticizing the Idaho legislature for meddling in how Idaho Fish and Game (IDFG) manages wolves and other Wildlife. To be clear, IDFG has never had the authority to create wildlife policy. They have always just been tasked to ONLY administer wildlife policy that had been established by the state legislature. Following is Idaho statute 36-103 with the corresponding link that reads:

Idaho legislators are constantly having to place controls and checks on IDFG to reign them in as their ideology and philosophies have gone environmentally extreme left due to the majority of the universities and scientific community going radical enviro left. For example, IDFG has fought the legislators for decades on killing ravens to protect sage grouse and to provide emergency winter feeding to save big game during terrible winters. From 2011-2014, IDFG  spent untold resources on their radical Wildlife Summit where they tried to merge with radical enviro groups to get funding and give them a seat at the table. Despite IDFG's efforts to destroy Idaho's backcountry of it's rich big game herds, Sportsmen did try and fight back to save the Lolo zone.  The 2002 Idaho wolf plan required IDFG to closely monitor big game and wolf populations so wolves wouldn't negatively impact our big game and hurt our outfitters. Unfortunately IDFG opted to not follow this legislative statute and backcountry elk, moose and mule deer populations plummeted and many of the outfitters went broke. In fact IDFG has not even counted the Selway elk zone since 2007!  For IDFG's 2013 elk plan we wrote a significant article and questioned why IDFG should even have an elk plan because they claimed and continue to claim to have all these elk but stopped consistently counting elk after wolves arrived in backcountry units.  They used to count elk every 2-3 years in every GMU and maybe it will take legislators to hire more 3rd party contractors to do this as well?  How can you manage what you don't monitor? So Idaho For Wildlife created their own elk harvest graphs from IDFG data to at least measure the devastation as elk harvests plummeted in Idaho's wolf saturated backcountry.

In May of 2011, after years of wolf lawsuits, Idaho was finally able to manage wolves because of the delisting Rider attached to the budget bill that stopped the enviro's from their constant lawsuits. In 2011, Idaho For Wildlife had just finished working with the IDFG commission to end the terrible 2008 wolf management plan requiring a minimum of 500 wolves, and revert back to the original 2002 wolf management plan requiring 15 packs and 150 wolves. The Rider (SEC. 1713) put Idaho back into being able to manage wolves and to follow the 2002 wolf plan. We worked with congress to include the phrase, "shall not be subject to judicial review" in the delisting Rider to end the lawsuits as long as IDFG followed the 2002 wolf plan. In the delisting plan, the Feds required a mandatory 5-year post-delisting monitoring period where, if IDFG allowed the wolf populations to drop below the guidelines, the Feds would once again take over wolf management and penalize us by adding an additional 5 year monitoring period. In the 2002 wolf plan, it gave Idaho additional wolf control tools because the experts knew that wolves could not be controlled by hunting and trapping alone.

In 2011, which was Idaho's first year of being on the Federal wolf management probation, the new IDFG director Virgil Moore, who was an absolute predator lover, began to stop collaring and monitoring wolves. In 2013, David Allen, the CEO of the Rocky Mountain Elk Foundation at the time, phoned Steve Alder of Idaho For Wildlife and reported that IDFG had just refused RMEF's $50,000 grant to purchase wolf collars to keep Idaho from potentially losing state wolf management. Meanwhile two outfitters in the Salmon area who were very successful wolf trappers reported to Steve that they had volunteered to help IDFG trap and collar wolves but were turned down. Shortly after this, David Allen had also intercepted a letter from Defenders of Wildlife about this threat as the enviro's were pushing for the Feds to take back state wolf control due to IDFG's gross negligence. We immediately contacted the Governor's Office of Species Conservation and reported the situation. We also contacted the Governor's office directly, legislators and IDFG commissioners and they immediately forced IDFG to aggressively begin to collar and monitor wolves to keep Idaho from losing state wolf management control.

Since May of 2016, IDFG was past the 5-year post-delisting monitoring period but they continued to not follow the 2002 Idaho wolf management plan requiring only 15 packs and 150 wolves. Even though the IDFG commission now had all the tools to control wolves they failed to do so. Even with almost year around wolf seasons, and more tags to hunt and trap, wolf numbers were not coming down and wolf populations continued to be about 10 times above the required levels. It was obvious that the IDFG was using the trappers as scapegoats so the Dept. didn't have to do their job of implementing controversial aggressive control tools that the environmentalist in and out of IDFG hate with a passion. As a result livestock depredations continued to be rampant and backcountry big game populations remained in predator pits.

2017: Things got worse when wolf activist IDFG  managers manipulated sycophant IDFG commissioners into making a motion to no longer even have a maximum wolf population management quota which translates into managing for unlimited wolves with no monitoring mechanisms in place!  At the same time, IDFG commissioners also rejected implementing more aggressive tools like opening a spring wolf baiting season because they were more afraid of orphaning a poor wolf pup than saving our livestock and big game!

2018: Wolves were still out of control with no aggressive management, so as elk left the mountains to escape wolves and seeking sanctuaries on private property, they began destroying crops. IDFG has been charged by state statute to "bait" elk away from crops but it was easier to just hire sharpshooters using night vision scopes to kill the elk at night. Over 100 elk were slaughtered by IDFG sharpshooters in 2018 to mitigate crop damage.

2019: Increased wolf tags and trapping seasons continued but still no aggressive wolf management was implemented and elk were increasing their depredations on private property. So IDFG decided to go big or go home, so they slaughtered 216 elk which resulted in a national outburst of angry sportsmen.

2020: More liberal wolf hunting/trapping seasons where each hunter/trapper could harvest up to 30 wolves!

2021: Still over 1,500 wolves on the ground which is still over 1,000% more than required and still no aggressive wolf control measures from IDFG! The legislature finally said enough is enough recognizing that IDFG will never get the job done due to their environmental pro wolf ideology.

Following are just a few examples of why IDFG has to be kept in check by Idaho's conservative legislators.  For obvious reasons, Idaho's liberal legislators are typically IDFG sympathizers. The bottom web link has additional information including audio recordings of how radically green this department has become and why they need to be closely monitored unlike how they prefer to manage wolves!

It was leaked to IFW that 3 IDFG commissioners had received 5 big horn sheep permits within a 3 year period. For years we suspected that IDFG had been abusing the trophy big game permit system to provide payola to their boot licking sycophants. Now we had evidence and knew it was past time to stop this culture of corruption. So we contacted key Idaho legislators and they created yet another bill to reign in IDFG by taking away their fraudulent permit system. The good news is the permit system is now fair again and being managed by an independent 3rd party contractor.  IDFG  leakers also indicated that these trophy permits were being used to payoff their lap dog sportsmen groups like ISCAC (who had to re brand later.)

When we witnessed IDFG begin to cave to the Y2Y agenda by banning trapping and baiting in the Y2Y regions, the legislators once again had to be involved and they created additional transparency tools to better control IDFG like negotiated rule making. This further reigned in IDFG so they could not make any policies on their own without legislative oversight because they couldn't be trusted due to their radical pseudo environmental religion.

"The Department believes the greatest return to society from the wildlife resource occurs when the maximum variety of products is provided and that maximizing a single product (e.g., harvest) is not necessarily desirable. We will encourage and promote non-consumptive use of elk"………….....Jim Unsworth, Idaho fish and game elk Management plan 1991-1995.


“We explain five reasons why hunter recruitment and retention efforts may be ineffective and may be distracting state wildlife agencies from engaging citizens in general and helping to broaden wildlife conservation. Next, we give examples of how state wildlife agencies might connect with and engage non-hunters, including adopting a citizen-based business model and expanding what we call “hunting” and who we call “hunters”…………Michele Beucler, 2012 IDFG Summit Project manager


"Ultimately, predator reduction programs reduce the effectiveness and damage the credibility of management agencies." "It should not be assumed that maximizing the ungulate population is ‘natural’ or represents a ‘balanced’ system."........Peter Zager, Idaho Fish and game biologist Region 2 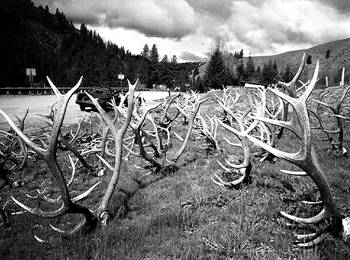 100+ dead 6x6 bull elk found in Garden Valley in 2002 that IDFG allowed to starve because they would not follow Idaho legislative statute.

Per Val Geist:  (Colorado wolf talk August 11 2018 )
"The publicity making lament of the National Wildlife Federation about the state of affairs on "protected" areas, is in good part due to the self-infliction of dogmatic, uncritical protectionism, in which even monitoring would be shunned as it smacks of intervention. Ergo, no science, no scholarship disturbs the fundamentalist religious view that "protection" is the salvation of nature. In reality, its exactly the opposite! Protectionist policies lead to the unwitting degeneration of nature, the longer and more effective the protection, the greater the degeneration. Has the Wildlife Federation, let alone the Sierra Club or humane societies ever learned any lessons from the great and - when it is allowed to work - wonderful North American Model of Wildlife Conservation?"