Is Idaho Fish and Game trying to get Sage grouse listed on the Endangered Species Act?


There is a saying, "Nothing is good or bad unless it's compared to something".  Let's compare IDFG's Sage grouse science to Nevada's and other states to see how similar they are. When wolves began killing off Idaho's elk population, IDFG biologists and managers primarily blamed habitat and minimized predation. It doesn't seem to matter what species of wildlife Idaho is losing, the IDFG always finds a way to blame it on poor habitat!


Following is a special report from Nevada entitled, "Sage Grouse, Son of Spotted owl" (Special Report on Sage Grouse) This report is a must read providing credible evidence of the impact predators are having on Sage Grouse.

"We need to manage for both cover and ravens. They're interactive.".......Dr. Peter Coates, Wildlife Bioloigst with the USGS. How many Raven's has IDFG Director Moore ordered to be removed in Idaho?

"Raven number have increased at least 600% in Nevada in the last 20 years and more than 1,500 percent in some places"

"According to research biologists who study raven predation, these black birds have a more deleterious effect on sage hen nest survival than any other single element".

"Almost all Federal and State biologists continue to dismiss and disparage the idea that predators have a role in sage grouse population changes."

"Yet biologsts, state game and fish departments and the FWS continue to insist that only habitat degradation has driven sage grouse declines."


Project 21 Nevada:     Sage Grouse and WMA Turkey, Waterfowl, Shorebirds. This program started in 2008 and still going.
WS-NV proposed a budget of $16,261 to conduct raven removal within the proposed treatment areas during the FY11. A portion of this ($2,000) was identified for possible use if needed at the Overton WMA. This was not done in 2010 but has been done in the past.
Project Area: Sage Grouse lek habitat throughout the state as needed and identified by NDOW biologists and or Overton and Steptoe Wildlife Management Areas.
... Target Predators: Ravens, badgers, skunks, coyotes, foxes and bobcats.
Control Period: March - June.
Predator Control Action: The USDA/APHIS Wildlife Services will remove ravens using DRC-1339 and coyotes by using calling, shooting, leg-hold traps, aerial hunting and snares. Bobcats are targeted on a case by case basis using calling, shooting, leg hold traps, aerial hunting and snares, to remove offending animals. Raccoon's, skunks, and badgers are removed using shooting, leg hold traps and snares. Ravens are known predators of sage grouse nests and chicks. Ravens are also known predators of waterfowl and shore bird nests and chicks. USDA/APHIS/ Wildlife Services was requested by NDOW to help reduce impacts caused by raven predation in designated areas utilizing DRC-1339 egg baits. Nest success of sage grouse, turkeys, waterfowl, and shorebirds should increase from the suppression of ravens.

Conclusion so far:
In the past raven control efforts on Overton and Kirch WMA's have been successful in producing clutches of waterfowl as well as turkeys. After several years of NO turkey production it was hypothesized that raven predation was the problem. This was based on observations of ravens predating on other nesting birds on the WMA. Subsequent to control efforts, observations by WMA personnel indicated turkey production was UP following raven reductions.

The State of NV. Also has a Project called their "Statewide Deer and Multi Species ENHANCEMENT PROJECT".
This project is supported by Wildlife Services aerial hunting program to Control Predatory animals for game species ENHANCEMENT...
Imagine that...

STRATEGIC PLAN FOR CONSERVATION OF GREATER SAGE ‐GROUSE IN NEVADA

While predator control may not be a long term solution to declines in populations of sage grouse, it has been shown to be an effective tool during the breeding season to gain increased survival through the nesting and early brood life cycle stages (Coates 2012).

If you Notice on the Nevada Plan, Predation is Threat number 3. 2. Pinyon-Juniper Encroachment
3. Predation

"As should be expected, predation is and has always been the major cause of sage- grouse mortality. Predation during nesting and early brood-rearing has the greatest influence on sage-grouse populations. Nest predators identified in Wyoming studies include badgers, red foxes, ravens and ground squirrels. In addition, golden eagles, red foxes, ravens, coyotes, various hawks, bobcats, and weasels prey on sage-grouse
throughout the year."

Although red foxes were likely not responsible for the initial reduction in the sage grouse population, our data suggest that red fox predation is a major factor limiting the recovery of the population and, if left uncontrolled, threatens extirpation of this sage-grouse population."

Incidentally, sage-grouse could also have benefited from the high numbers of sheep concentrated in winter areas. Proper sheep grazing in the winter has the effect of rejuvenating sagebrush. As  Sheep numbers declined, sagebrush became decadent to some degree. Although natural cycles may have once occurred in sage-grouse populations, change in the environment since the 1970s has caused a long-term decline. Once a decline in sage-grouse numbers occurred, the increase in predator numbers, especially red fox and ravens, would be more detrimental to the grouse.

Although predation was,the most common cause of death for adult sage grouse in Idaho, high annual survival (Connelly et al. 1994) and relatively few deaths over winter suggest that predation had little impact on sage grouse populations.

On the Current Idaho Fish and Game Sage Grouse Plan, Predation is listed dead last out of the 12 causes of mortality.
Note that IDFG peer reviewed, fact based science even has climate change as a bigger killer than predation!


Here's another, analogous picture: a courtroom full of lawyers in expensive black three-piece suits in U.S. district court in 2011. Arguments proceed for the plaintiffs: Imagine Western Watersheds project, WildEarth Guardians, or the center for Biological Diversity. The Defendants: U.S. Fish & Wildlife Service. Observing, officials from Bureau of Land managment (BLM), U.S. Forest Service, and God knows who else. Enviromental groups prevail, and FWS, "in an effort to improve the implementation of the Endangered Species Act, agrees to address the needs of more that 250 candidate species over the next six years".

Included in the agreement are stipulations to complete reviews of the bistate sage grouse population by 2013 and the greater sage-grouse by 2015. If the sage grouse is listed, it will be in the purview of the FWS to bless every activity that occurs on public lands: Hunting, off-road rallies, camping, trail riding, agriculture, and that new gazebo in your summer home's backyard. Enviromental groups sue the Feds, but it is the people of the West who are punished. What the Natural Resources Conservation service reports is that 40 percent of sage grouse habitat is on private land. The restrictions to activity will still apply. Ravens are serious killers of sage grouse, but they are not the only ones.

As enviromental groups continue to file multiple lawsuits and clog the judicial and land-use management systems with one listing after another, the western way of life faces extinction. And as the black suits leave the courtroom, raucous laughter can be heard!


What a tragedy to learn that some of these Black Suits have been meeting with IDFG staff and leaders to "Assist"  them with finding new funding opportunities!


If we think Raven's just kill Sage-Grouse we had better think twice! 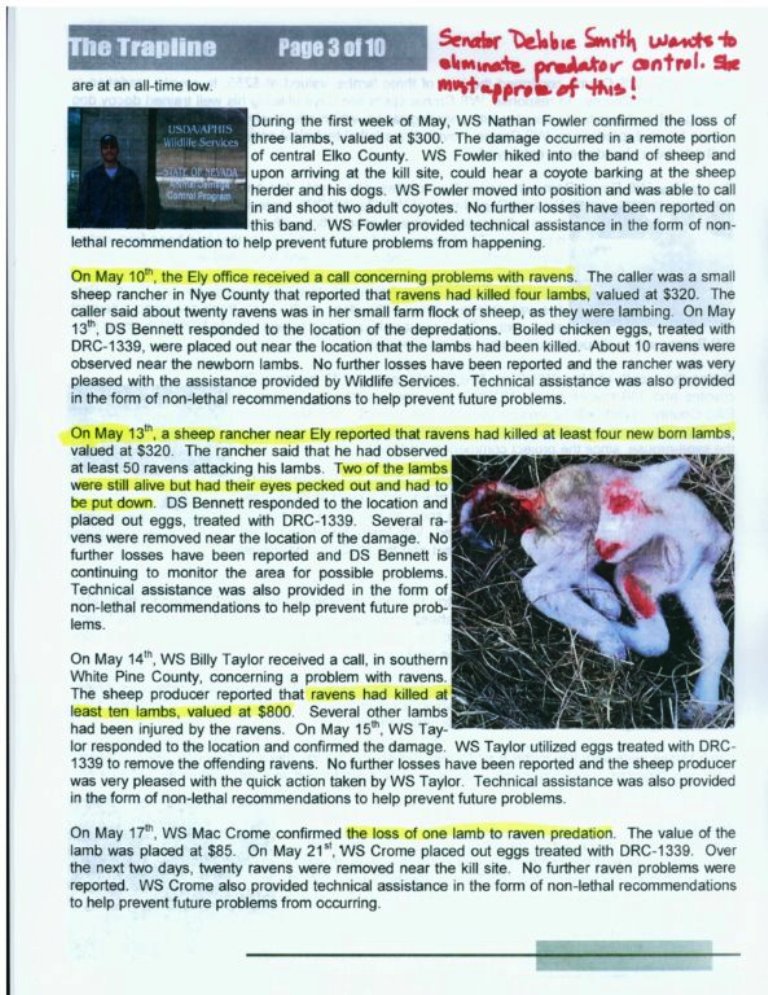