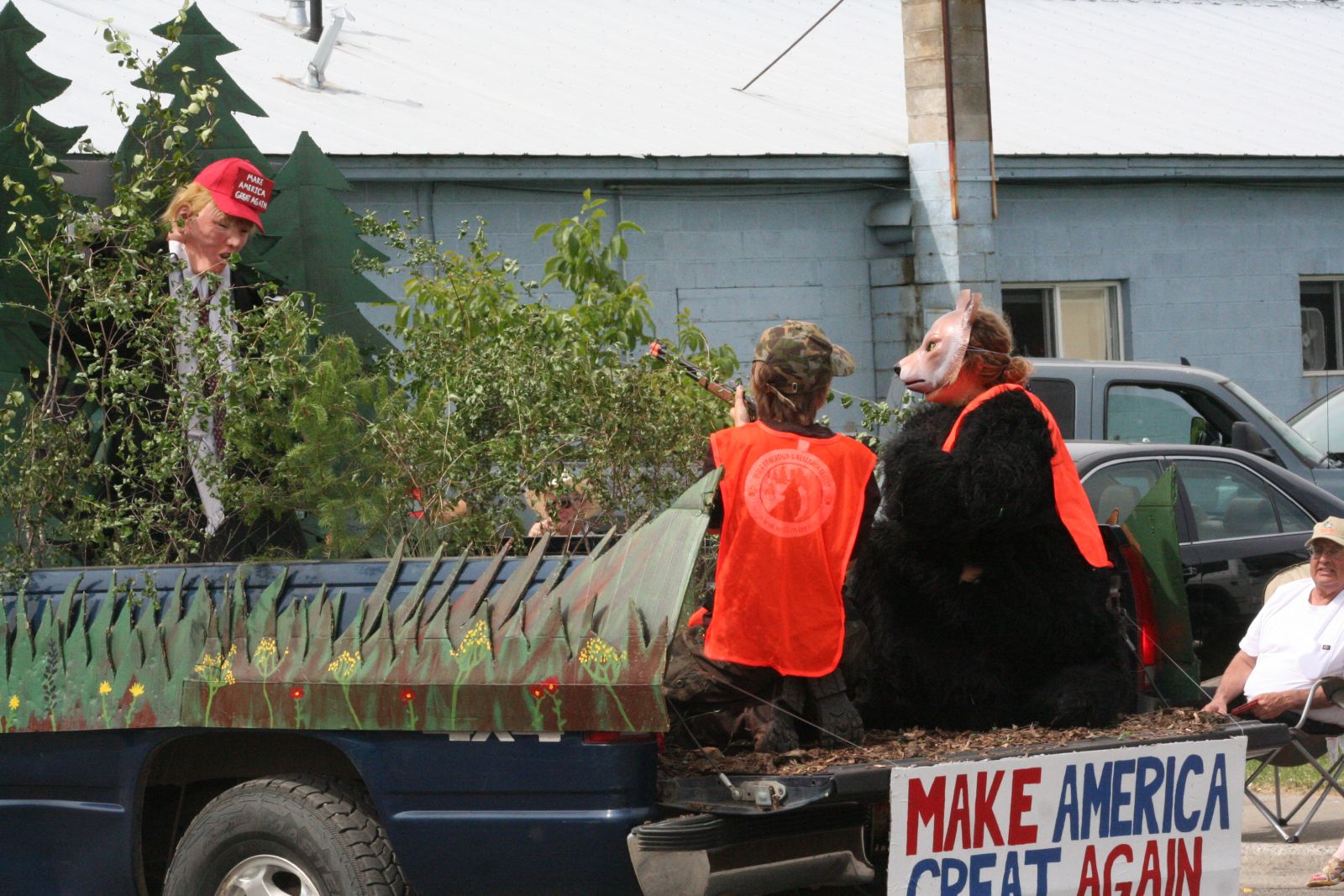 On July 3rd 2016, during the  annual Winchester, Idaho parade,  A wolf conservation group,
Idaho Wolf Resource center, who raises wolves and provides wolf advocacy and education
tours to grade school children, joined forces against Donald Trump. Jeremy Heft, Biologist
and wolf center Director, using the wolf centers pickup truck as his mobile protest platform,
deceitfully registered and entered what parade organizers believed to be was a float based
on a Pro Trump agenda. Parade organizers policy is to not turn away floats based on political
positions but they had no idea what this float would transform into! 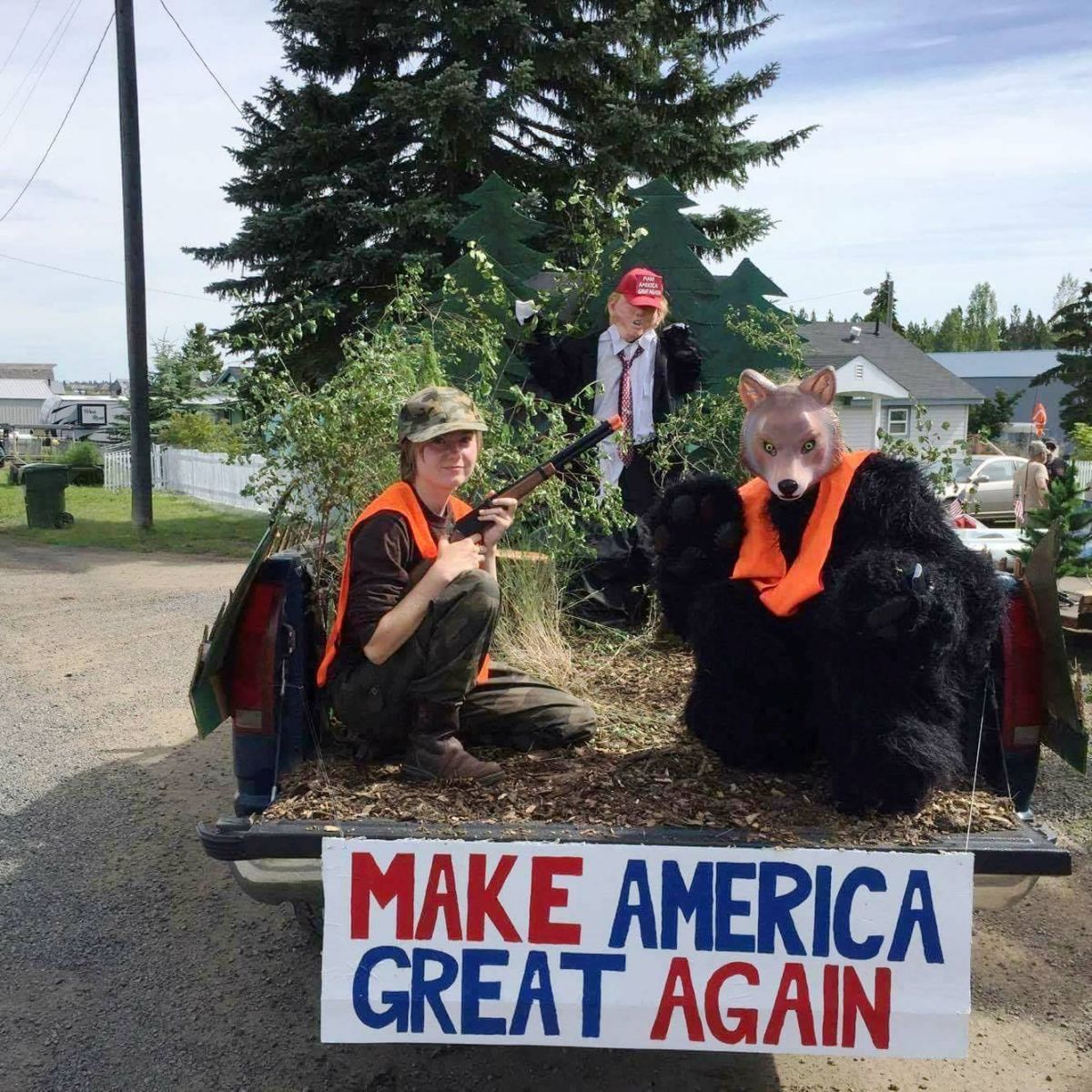 Little did the parade judges know that as soon as the Parade began the female intern
holding the rifle who was pretending to be hunting the wolf quickly re-positioned the
rifle and pointed it directly at Mr. Trump pretending to shoot. Then the other young
female intern who was dressed as a wolf would repeatedly run to the front of the truck
and viciously attack Trump. These two youth under Mr. Heft's supervision would make
these same assaults during the entire parade. 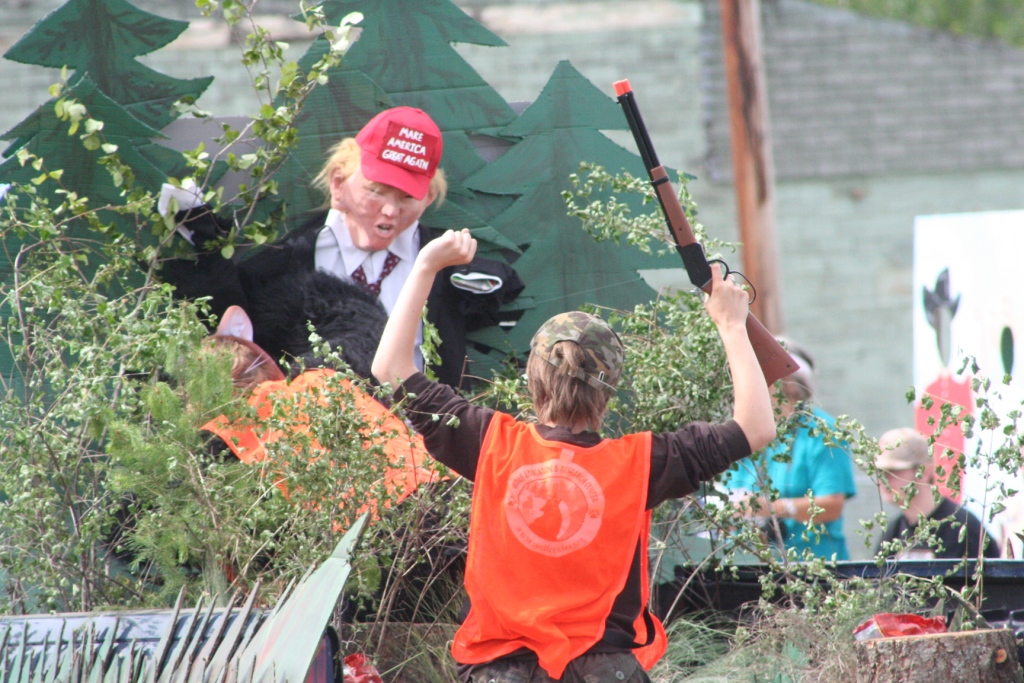 The most controversial observation occurred when the parade ended and Trump
was thrown to the ground where he was kicked and beaten by the young girl pretending
to be a wolf. All of this in front of hundreds of viewers especially innocent children who
came to watch a peaceful parade. 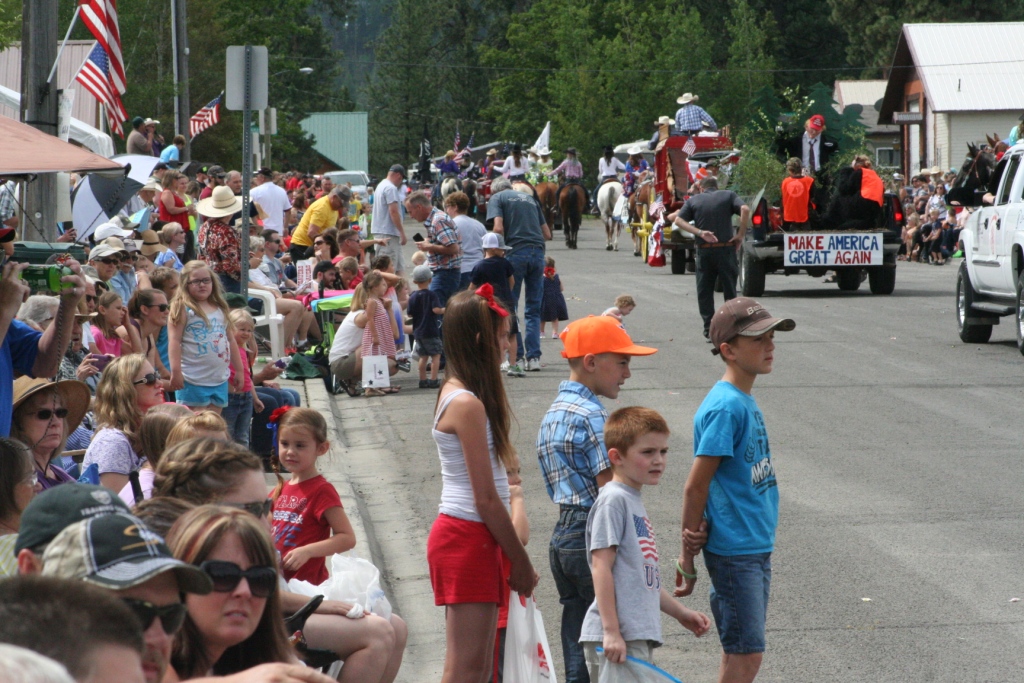 Following are comments from the parade organizers:

"That float was extraordinarily offensive and caused a big rift in the community, it
was awarded first prize in humorous by our judges before it was seen "in action" -
who believed it was pro Trump. "I also know that due to the offensive nature several
did not take pictures of that float. Our announcers almost left during the parade and
tried demanding they be removed. If I had seen the float I would have tried to stop it
from happening before hand. If you have heard, they strung up Trump and had a
girl shooting at him and a person in a wolf costume attacking him. There has already
been one letter to the editor of our local paper out of Nez Perce and I hear more are
on the way."

"We had no prior knowledge of the float and we do not endorse or support anyone
by allowing participation in the parade. For example, all of our political entries were
grouped together and we had both sides represented." 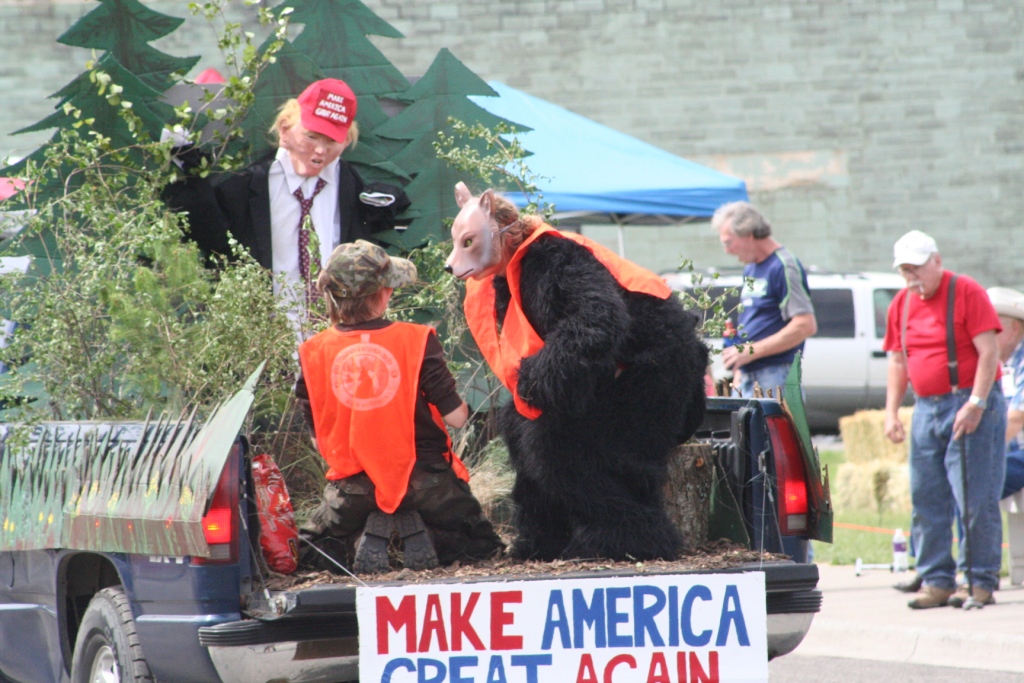 Following is a letter to the editor from a brave lady that you won't see in the main media:

The Winchester Days ... celebration proved to be a sad day for America.
The Wolf Education Resource Center crossed the line. Their depiction of what would
"Make America Great Again," using the words of presidential candidate Donald Trump in a
tacky parade float was too much. While two naive summer interns dressed as wolves
proceeded throughout the parade to shoot and beat the presidential candidate Donald Trump,
the community of Winchester watched in shock. ...Jeremy Heft, you are supposed to be the
moral compass that guides the young "uneducated" college interns. They spend their summer
here in Winchester under your care. You put two children on a public stage waving a gun and
shooting at the image of a human being who is also a presidential candidate. Tacky and shameful.
You, Jeremy, like to call yourself a member of our community. But you have just shown a total
lack of respect for those who live around you. We are a logging, farming and largely a retired
veteran community (Republican base). ... We have been very patient and gracious to you,
the wolf center, your patrons and your cause.This weekend you mocked and killed an image
of our Republican presidential candidate. To my knowledge he has not spoken out against
endangered species in any of his campaign speeches to date.

Take your people, take your wolves, take your liberal/environmental values and opinions and leave. ....
You have shown your true colors. ... Goodbye.