12-29-2013: Zero wolves were harvested during the predator derby. 21 coyotes were taken. One wolf was seen.

12-22-2013: Television reporter visits Salmon, Idaho and interviews  residents who have been threatened that the radical animal rights activists,"Will burn down their businesses with them inside," it if they don't withdraw their support of the derby!

The real question is why do the folks living in this little remote Idaho town of 3,000 people feel they should hold this predator derby?

This is an incredible opportunity to team up with our son or daughter during Christmas break and spend some quality time in the gorgeous Salmon, Idaho Country! Some of our objectives are to teach hunting skills, gun safety and wolf disease prevention to our youth and others.

Even though we don't expect to harvest a lot of wolves we hope to take quite a few coyotes. Wolves in Idaho are considered a big game animal just like a deer or elk. Coyotes are classified as an unprotected predator and can be hunted year around. Youth hunters who are 12 years of age or older, and have received their hunters education certificate and have a valid hunting license and wolf tag may hunt wolves. Youth that are 10 years or older who have passed hunters education and have a valid hunting license can hunt coyotes as long as they have a mentoring parent or adult.

Another reason for the derby is these people feel helpless as they experience depredation of their domestic livestock and the local wild elk population. The Salmon economy is largely dependent on ranching and hunting. This is a typical manifestation of great people banning together to seek different solutions when they feel threatened. So far solutions have evaded these good people. The "derby" is one way of trying to surface their distress.  On a personal level many of these rural folks not only feel the pinch of losing real value from livestock losses or reduction in their outfitting businesses and inabilty to provide their families a winter meat source.

The Salmon citizens have a legitimate fear of disease that is carried by a parasite alternately hosted by canines and ungulates.  This parasite was locally low level endemic prior to the wolf and is now becoming much more widespread due to the wide ranging characteristic of wolves.  The parasite can be hosted by humans as it lodges in the liver and brain and can be fatal.  Wolves eat an infected elk, the parasite is passed in wolf scat and as is the habit of canines, when another canine rolls in the dried scat the parasite lodges in the fur and can spread to humans when a ranch dog or pet is petted.  Ungulates pick it up by eating the grass in the proximity.  It is now found in 65 to 70% of wild ungulates and is beginning to be found in cattle.  The cysts are very large and ugly.  Hunters are now strongly encouraged to wear protection when dressing and handling internal organs of harvested game. Before wolf reintroduction this disease was very local and endemic, primarily in sheep and coyotes in Utah.


Even uglier than the pus filled tapeworm cysts that are now common in most of our Salmon's elk is the behavior of some of the pro wolf animal rights activists. Not only have they tried to infect our computer's with their facebook posts along with thousands of disgusting emails laced with vulgar language and horrible threats. None of these people seek a better understanding of our perspective or suggest solutions.  Some threats reach the threshold prompting official investigation as death threats are launched against local businesses and others who support the derby.

We are grateful for our right to hunt and fish in Idaho and we can never take these rights for granted! We are also aware that Idaho has a statute (36-1510) that reads, " No person shall Harass, intimidate or threaten by any means including, but not limited to, personal or written contact, or via telephone, e-mail or website, any person who is or was engaged in the lawful taking or control of fish or wildlife any Interference with hunting, fishing, trapping or wildlife control."

We are grateful for the Idaho Fish and Game, Idaho Legislature and the IDFG commission for providing fair chase hunting opportunities such as what will occur during this event as a vehicle to attempt to keep wolves in check.  Idaho’s elk populations have been devastated in high wolf density regions of the state due to wolf predation. Since wolves don’t self-regulate, they can reduce the prey populations so low they can fall into  “Predator Pits.” Wolves can actually "Wink" out of the ecosystem once they have eliminated the prey base. Prudent wildlife managers in Alaska and Canada realize the importance of wolf control. As an example, the providence of Alberta has a current bounty on wolves with year around hunting in many areas. Canada has had far more experience with wolf management than the Lower 48 states and understands the devastation wolves cause to their big game populations and the livestock industry.  The radical animal rights groups such as Defenders of Wildlife oppose this derby and are spreading  misinformation all over the web about a feared wolf slaughter and mass killings of predators for no reason! Defenders of wildlife thrives on exploiting these wonderful traditional hunting opportunities with friends and family for the opportunity to raise more dollars to fight againt our hunting heritage. One of the local Salmon outfitters had 39 different hunters in his camp the past 2 years and only 1 hunter saw a wolf and he took a shot and missed the wolf. Wolf experts know that sport hunting is not an effective wolf control measure and this two day derby will not negatively impact the wolf population in this area. 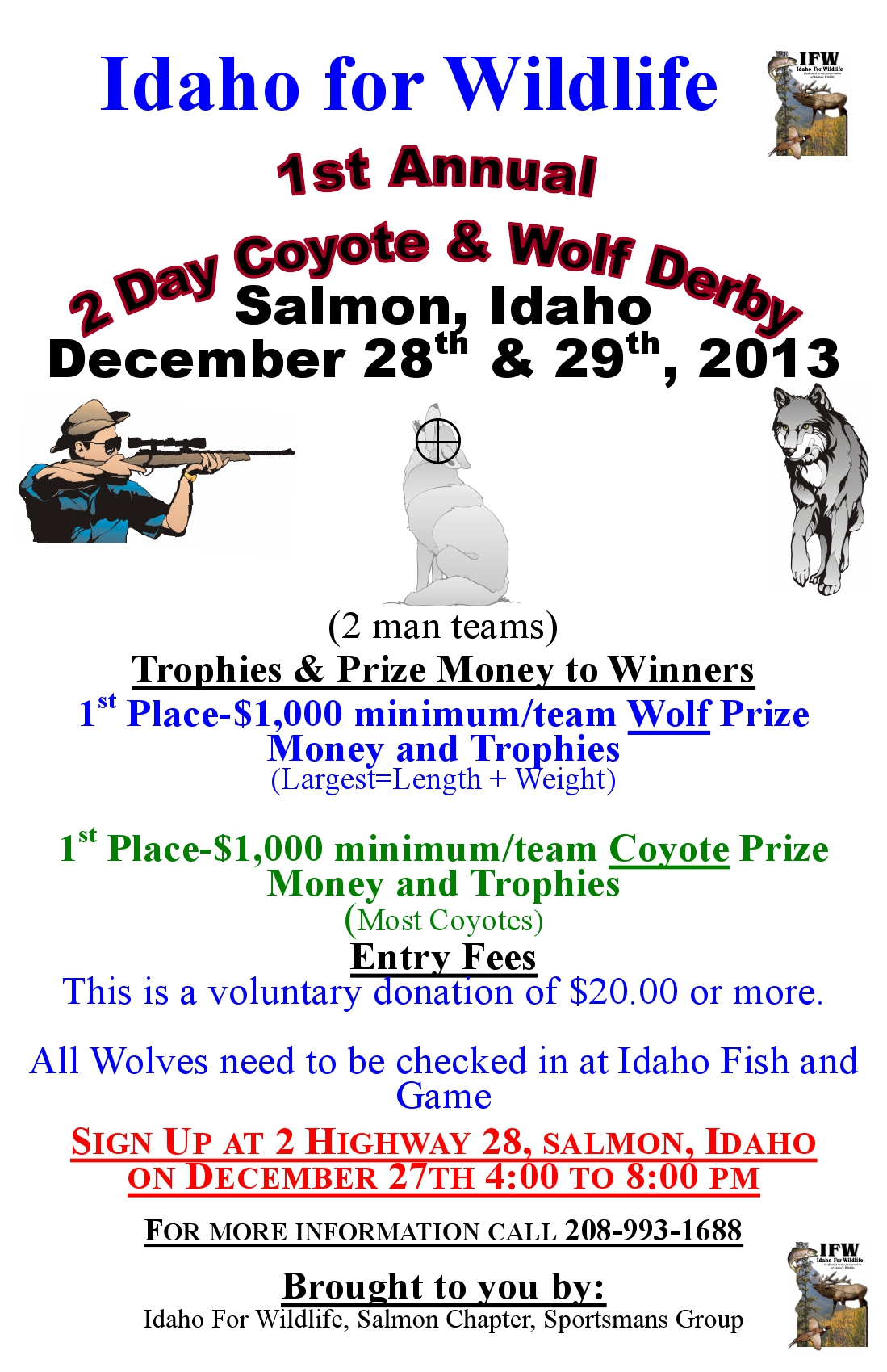